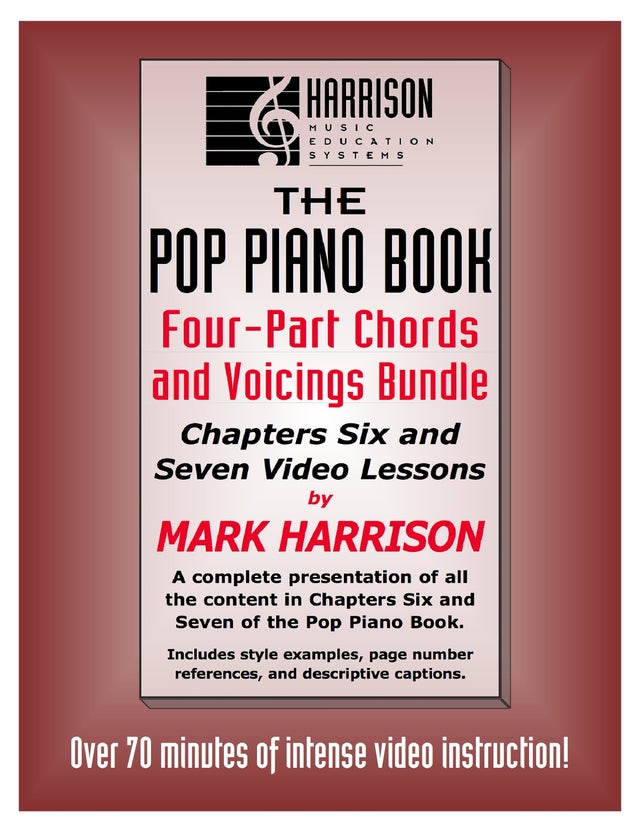 Click here to see trailer videos for Chapters One through Seven, of our Pop Piano Video Instruction Series.

Get the best possible continuation of your Pop Piano Book studies with our value-priced “Four-Part Chords and Voicings” Bundle, containing the complete video lessons for Chapter Six (Four-Part Chord Inversions and Voiceleading) and Chapter Seven (Creating & Using Four-Part-Over-Root Chords). You’ll get over 70 minutes of step-by-step video instruction, with Mark Harrison explaining and demonstrating the concepts, and improvising musical styles examples along the way.

The Chapter Six video covers the following topics in depth:

The Chapter Seven video covers the following topics in depth:

- using these voicings to interpret chord symbols and progressions

In addition to Mark's explanation and playing examples, the videos show the page and figure numbers being referenced in the Pop Piano Book, as well as text captions for further explanation.

To get the best out of these video lessons, we recommend that you have our Pop Piano Book while viewing!

Add to Cart
When you first purchase our video lessons, you'll be asked to set up an account at our video store (with name, email address, and password). This is a quick process which then enables you to easily access all of your video content from any computer or mobile device!
Buy Streaming/Download Version