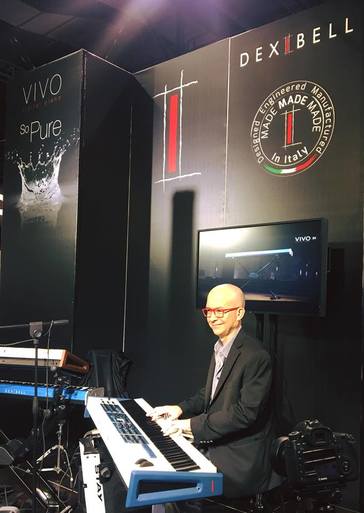 Pictured: Mark Harrison performing on the Dexibell booth at the 2018 NAMM show in Los Angeles.

Mark Harrison studied classical piano as a child, and by his teenage years was playing in various rock bands in his native Southern England. In the 1980s he began writing music for TV and commercials, including a piece that was used for the British Labor Party ads in a national election. He also appeared on British television (BBC), and became a fixture on London's pub-rock circuit.

In 1987 he relocated to Los Angeles to experience the music business in the U.S.A. He soon began performing with top musicians such as John Molo (Bruce Hornsby band), Jay Graydon (Steely Dan), Jimmy Haslip (Yellowjackets), and numerous others. Mark has written and recorded three albums with his contemporary jazz band (the Mark Harrison Quintet), and is currently playing on the club and festival circuit with the popular Steely Dan tribute band Doctor Wu.

Mark continues to write music for television, and his credits include Saturday Night Live, The Montel Williams Show, American Justice, Celebrity Profiles, America's Most Wanted, True Hollywood Stories, the British documentary program Panorama, and many others.

Mark has become one of the top contemporary music educators in Los Angeles. He taught at the renowned Grove School of Music for six years, instructing hundreds of musicians from all around the world. Mark was also invited to join the University of Southern California's Popular Music faculty for the 2013-14 school year, working alongside world-famous musicians such as Patrice Rushen, Alfonso Johnson, and the late Ndugu Chancler.

Mark currently runs a busy private teaching studio for professional and aspiring musicians, both in-person and online. His students include Grammy-winners, hit songwriters, members of the Boston Pops and L.A. Philharmonic orchestras, and first-call touring musicians with major acts. Mark's music instruction books are used by thousands of musicians in over twenty countries, and are recommended by the Berklee College of Music for all their new students. He has also written Master Class articles for Keyboard and How To Jam magazines, covering a variety of different keyboard styles and topics.

In 2018 Mark became an endorsed artist/educator for Dexibell keyboards (manufactured by Proel in Italy). Mark is delighted to be using these great keyboards in live performances as well as online classes worldwide.